Bodega Sepúlveda is a centenary restaurant where Barcelona’s culinary traditions are kept updated. It was tavern until 1936, when we sold stacks of wine, according to the times’ tradition. On October 2nd, 1952, the place was purchased by the current owner’s grandfather, Mr. Llorens Solà, who had been maître of King Alfonso XIII and who is responsible for having taught great culinary practices to a family who ran the inn Casa Solá, in Gelida, for years.

The grandson of the founding and current owner, Josep Solà, worked at the bar while studied commerce, an activity that took him to live for a while at the Lebanon years after. After the demise of his father, he took charge of the Bodega. He had enough aesthetic culture to understand that the atmosphere and decoration of this house belonged to a patrimony being destroyed in Barcelona city as soon as the city was growing famous. Besides, his conception of gastronomy would boost an offer, not always fashionable, of spoon stews which, on the long term, would bring current clients, that is, good gourmets, of all ages and social classes. 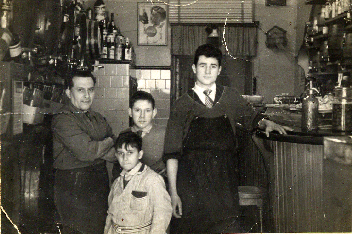 Josep Solà, together with his wife, Joaquina, and his daughters Nuria and Sonia, have invented the concept of tablecloth tapas, a way to eat that reminds the traditional Catalan fork breakfasts, that allowed eating, outside the customary schedules, splendid casseroles and quality sausages. Under some lights that are already collectible, gathering the vitality of a family that loves this business above all else, those sitting at its table have the chance to recover a way of cooking deeply rooted but also modern regarding the quality of raw materials. A large wine list where we can appreciate the patriarch’s knowledge, also contributes to define a place that should be a must in our agenda if we believe that eating is something more than a cold exercise of our senses.